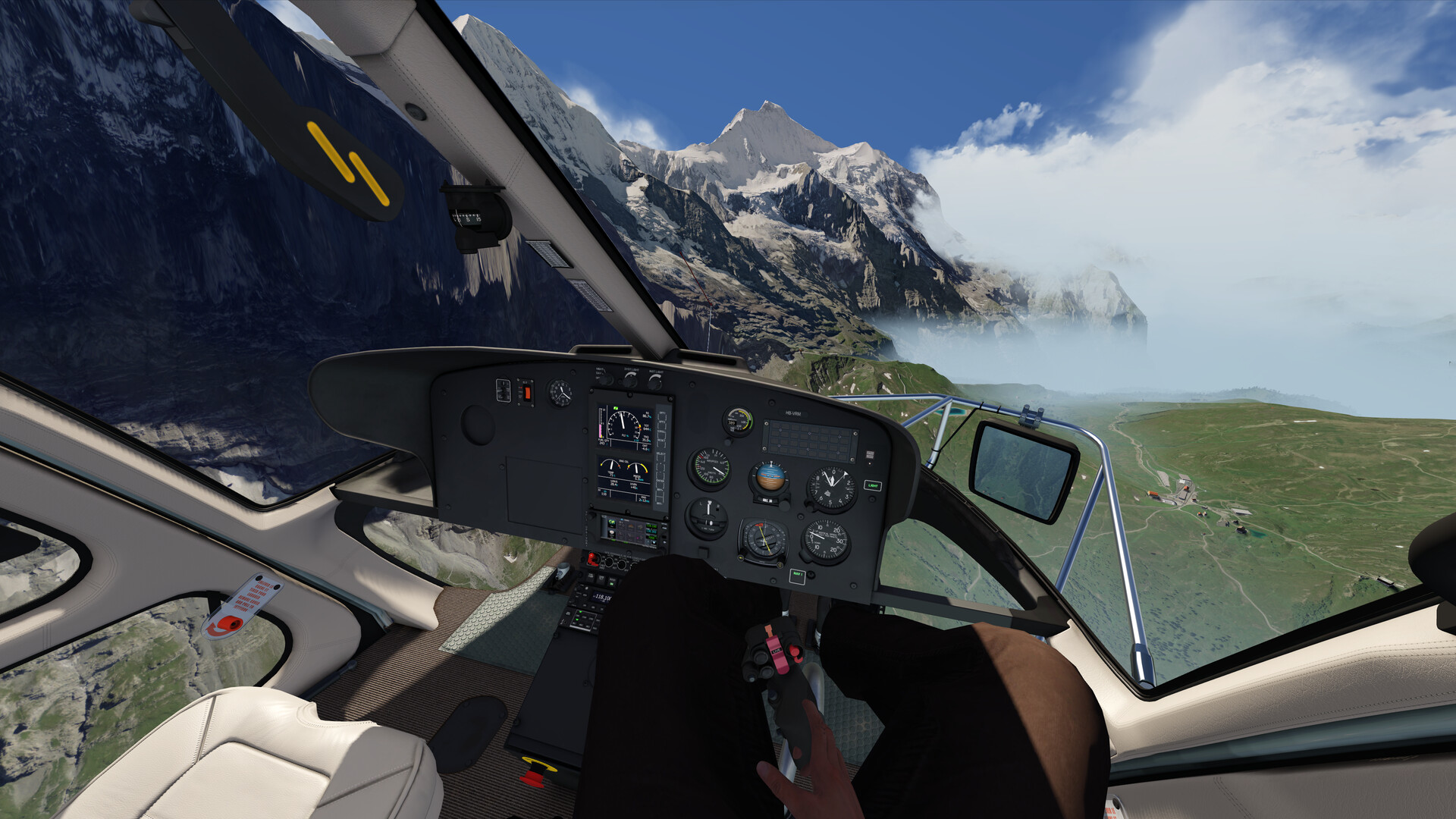 Flight simulators from VRM Switzerland enable flight experiences and the training of difficult flight situations in a level of realism never before achieved.

VRM Switzerland offers training solutions for professional pilots. A team of young engineers, specialized physicists and aviation industry experts develop the entire product range in-house. Together with EASA, VRM Switzerland works on new standards for flight simulators to enable all helicopter operators to increase flight safety. Partnerships with Kopter and other helicopter manufacturers as well as users enable VRM Switzerland to integrate its solutions closely with the know-how of OEMs and training centres and to open up new markets for training solutions for single-engine turbine helicopters.

The simulator's visual system provides 3D vision with unprecedented resolution. "This allows our ambitious pilots to effectively train for difficult scenarios at mountain landing sites, in bright sunshine and under various snow conditions, such as white-outs," says Gerold Biner, CEO of Air Zermatt. The low ecological footprint and the economical price were important criteria for Air Zermatt when selecting the VRM Switzerland simulator. In the long term, the simulator will enable Air Zermatt to conduct more internal trainings, reducing travel costs and time spent travelling to training centres abroad. "We haven't found anything else on the market that comes close to VRM Switzerland’s solution in terms of quality and technology," Biner continues.

In April 2019, Mountain Flyers from Bern-Belp were the first flight school in Switzerland to use the VRM Switzerland simulator to train their helicopter pilots. CEO and owner Christoph Graf has high hopes for the integration of the simulator: "More sustainability, less CO2, lower costs and higher safety are generally demanded by aviation. With the helicopter simulator from VRM Switzerland, we are taking a big step in the right direction: "Emergency procedures such as autorotations or exercises with 'tail rotor control failure' are trained on the simulator without risk. Our pilots are constantly improving their flying skills", says Nicolo Eicke, chief flight instructor of Heli Sitterdorf, summing up his experience with the VRM Switzerland simulator. In October 2019, the FAA included Vuichard Safety Technology for the first time in its Helicopter Flying Handbook for mastering the vortex-ring-state-situation. This procedure can be trained realistically and safely with the VRM Switzerland simulator. Claude Vuichard has tested the vortex-ring-state-simulation on the VRM Switzerland-Trainer and says: "This is the most realistic flight simulator ever built".

Together with its customers and authorities, VRM Switzerland is working to obtain certification of the simulator in order to ensure that it can be credited for training and checks. From introductory training on a turbine heli-copter to demanding scenario-based training, mountain flying and emergency training, the simulation is tai-lored to the needs of trainees. Thanks to realistic flight physics with real-time multi-body simulation and flight data validation, the simulation software offers an exact replication of flight behavior. The correct interaction of all systems prevents the occurrence of nausea. A "pose-tracking system" enables the representation of the pilot's movements in the virtual world. This makes the cockpit fully functional. Forces at the controls are used to simulate hydraulic system failures. The HESLO module makes it possible to train the basics of external sling load operations with mirror and vertical reference. Trainings with different rope lengths and loads allow to bring inexperienced pilots to a professional level. This enables them to safely carry out complex and demanding missions in a real helicopter.